Monitoring for PPCPs (pharmaceuticals and personal care products): This project used Chemcatcher® passive samplers as part of a wider study to determine water quality and the impact on fish health and the food web in the Sacramento-San Joaquin Delta, downstream of a wastewater treatment plant.  The research was conducted by the Aquatic Health Program Laboratory, School of Veterinary Medicine, University of California, Davis. Based on their assessment of overall effectiveness, they have purchased additional Chemcatchers® to deploy at multiple locations.

The Sacramento-San Joaquin Delta, together with the San Francisco Bay, is the largest estuary on the west coast of the United States. It provides half of the state’s municipal and drinking water needs, rich agricultural land and a rich wildlife habitat for hundreds of native species.

Sacramento River supports one of the most important salmon fisheries in California. However, many once-abundant indigenous fish species are now classified as threatened or endangered. Threats to the ecosystem include habitat loss and degradation, food limitations, invasive species and toxic contaminants from agriculture and urban sources.

The goal of this study was to evaluate the ecological status of the Delta, based on the chemical quality of the water and the health of the fish/food web. 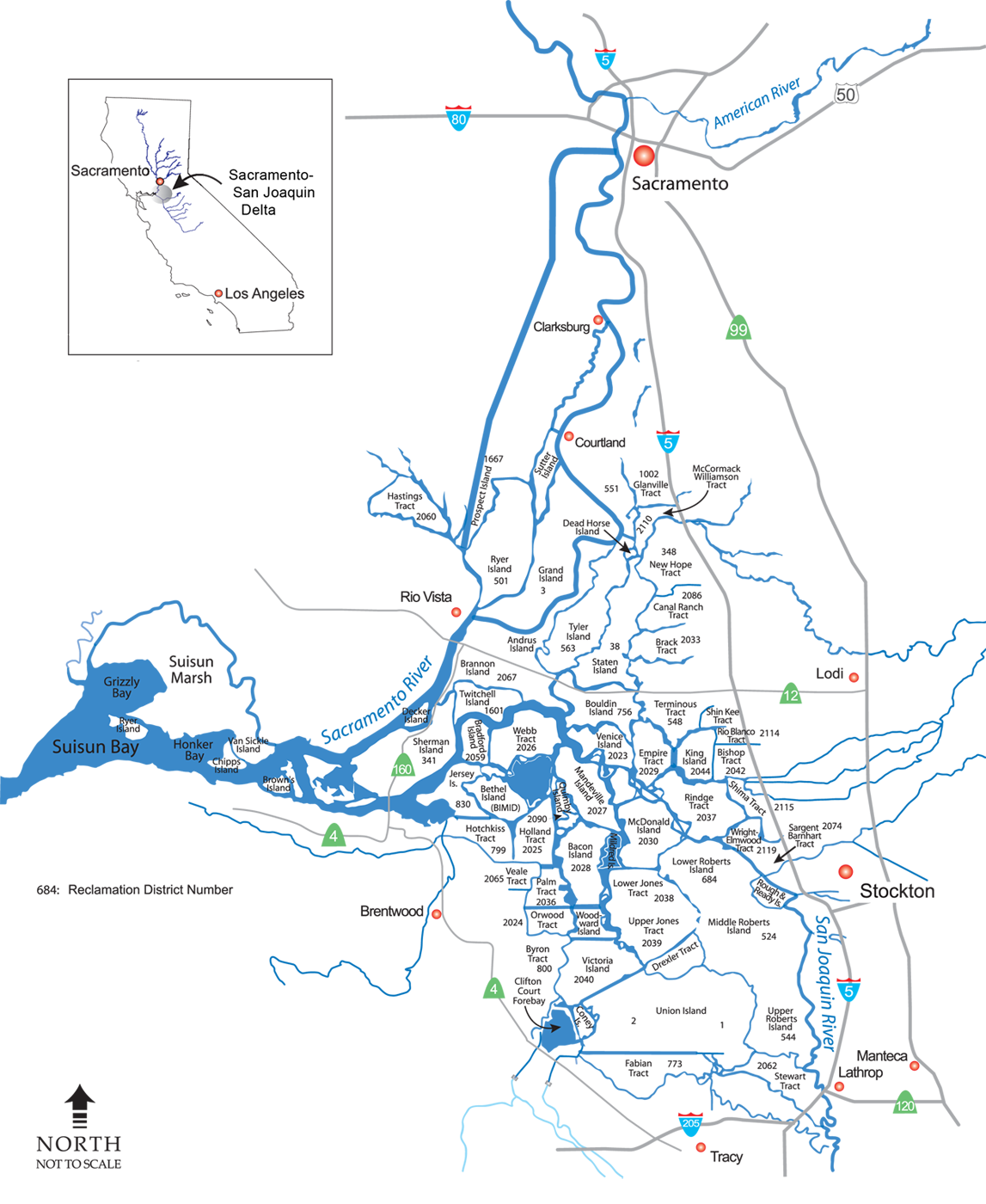 The site chosen was a Department of Water Resources’ real-time monitoring station, in the Hood locality, 20 miles from Sacramento city. This station is used in a number of long-term projects and special studies, and it provided an ideal location to house flow-through exposure tanks.  The location was downstream of agricultural and urban stormwater runoff sources and the output point for effluent from the Sacramento Wastewater Treatment Plant. The WWTP had a design flow of 181 million gallons per day and work had commenced on a treatment upgrade project.

The primary aim of the research was to determine the impact of ammonia from the various sources mentioned above on fish health.

As a secondary objective, the team used the study to evaluate the effectiveness of the Chemcacther® passive sampling system as alternative means of achieving lower limits of detection compared with traditional spot sampling.

“In California, passive samplers are gaining more momentum with some of the state agencies and other regulatory entities, so we were trying to determine the differences between the two methods in screening for contaminants of emerging concern,” explained Marie Vasi Stillway, a Research Supervisor at the Aquatic Health Program Laboratory, School of Veterinary Medicine, University of California, Davis.

Fish and food web health were evaluated by exposing juvenile Rainbow Trout (Oncorhynchus mykiss) and the amphipod Hyalella Azteca, with real-time flow-through, to water from the Sacramento River.

There were four exposure events over the one-year project, timed to capture potential contamination events; namely first flush, snowmelt, summer irrigation and autumn. Each event consisted of two back-to-back exposure periods, as shown in table 1 below.

Following, the exposure, the two species were evaluated for survival and sub-lethal endpoints such as growth and swimming behaviour.

Chemical water quality was analysed with both conventional laboratory methods for manual samples taken on the first day of the exposure and using Chemcatcher® passive samplers, deployed for the duration of the exposure, with analytes measured following extraction from the receiving disks.

Flow-through tanks, housed in the DWR monitoring station, were designed to expose the test species to river water, constantly over the course of the study. (See figure 1 below) Meanwhile, Chemcatcher® samplers were placed in the Hood source tank, also shown below.

While HLB receiving disks pre-conditioned with methanol would normally be recommended for PPCPs detection, in this case, the team opted to use  C18 across al four exposure periods. 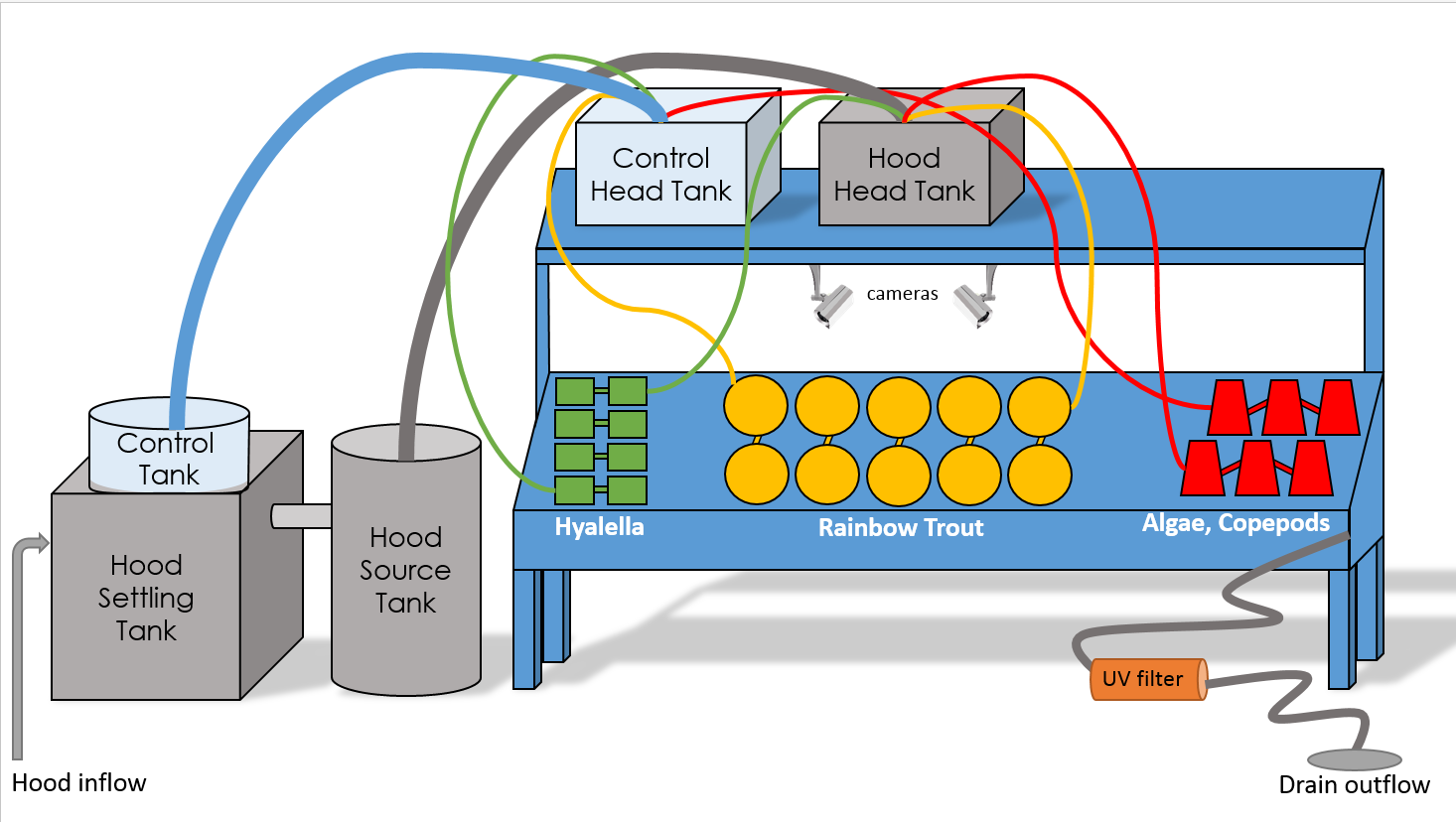 Figure 1. Schematic of the ex-situ flow-through system installed at the DWR Station at Hood. 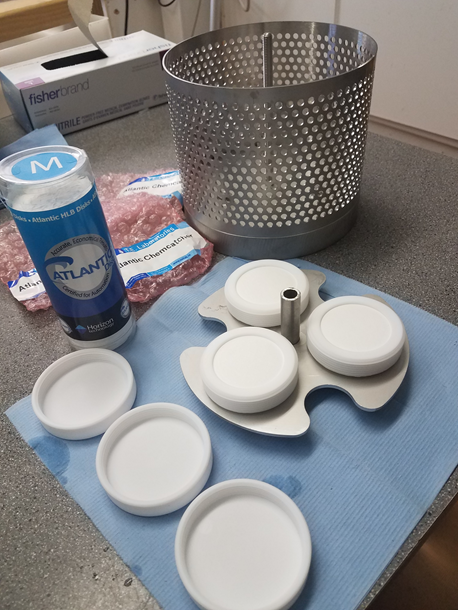 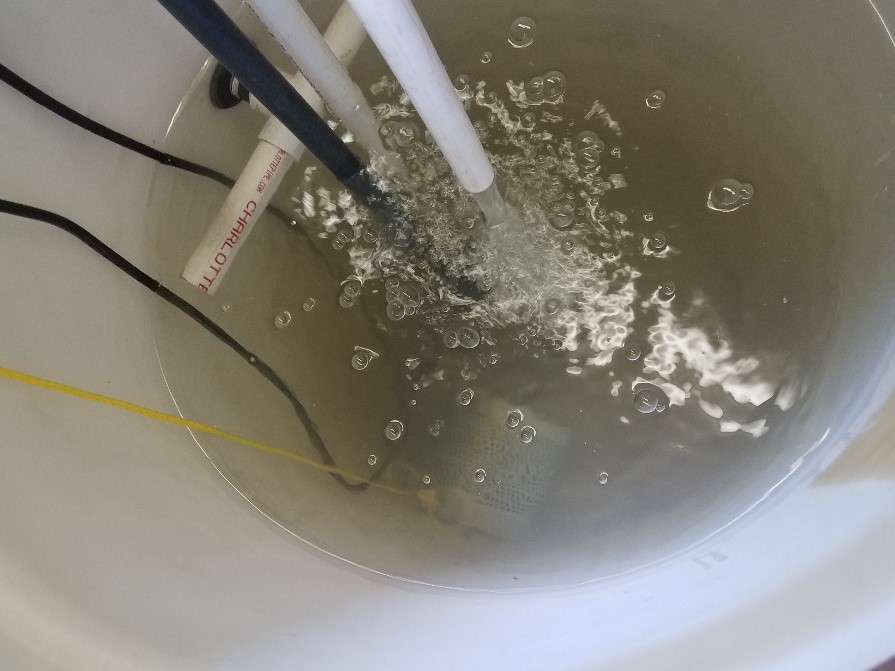 Filter disks were collected at the end of each exposure period, wrapped in foil and kept frozen at -20°C. The frozen disks were then shipped on ice to the Stream Ecology and Assessment Laboratory at California State University Long Beach (CSULB) for extraction. The extraction was performed by filtering 20 mL of HPLC grade methanol through each disk.

After extraction, 20 mL of elutriate was sent to Weck Laboratories (Hacienda Heights, CA) and the results for the three disks were averaged to provide the analytical chemistry results for that exposure period.

The one-time grab samples were also analysed by Weck Laboratories. After collection, they were kept at between 0-4°C overnight and shipped on ice the following day. The results were calculated, as ng/, based on the volume of water collected.

The samples were analysed for a total of 103 contaminants of emerging concern (CECs), using the methods outlined in Table 2 below. 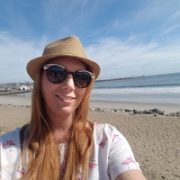 “Because of our testing location, downstream of the wastewater treatment plant, our assumption was that we would see more pharmaceutical and personal care products (PPCP) rather than your typical pesticide suites.”

Chemcatcher® samplers can be used to determine time-weighted average (TWA) concentrations of a substance, or the equilibrium concentration in the sampler; however, the sampler must be calibrated prior to deployment to determine the uptake rate (Rs) of a specific analyte.  Here, Rs is used as a surrogate for the volume of water that is passed through the passive sampler over a unit of time, typically L/day.

However, in this study, the team at the Aquatic Health Program Laboratory did not have the capacity to perform the calibrations for the number of analytes being screened; therefore, it was not possible to calculate TWAs or specific analyte concentrations in terms of ng/L/day.  Instead, the Chemctacher® results were calculated in terms of ng/L of methanol.

Exposure to the Sacramento River water at Hood, California, did not elicit any acutely negative effects in the Rainbow Trout over the course of the study. In comparison, Hyalella Azteca did exhibit both acute and sub-lethal negative effects at various time points across the study period, namely during the second First Flush Event, the second Snowmelt Event, the first Summer Irrigation Event, as well as the second Fall Event.

Side-by-side comparisons of the Chemcatcher® passive sampler and the one-time grab samples were evaluated in terms of number of contaminants detected, and the efficacy of each method. In general, contaminants were present in all events. Chemcatcher® was successful in detecting a variety of contaminants across the study period, comparable to those analytes detected in the one-time grab samples. The passive sampler consistently detected the same chemical types in all events, indicating that these chemicals exist in water throughout the year.

In the grab samples, a higher number of chemicals were detected. However, not all chemical types were consistently detected in all events.

With the exception of DEET, no pesticides were detected.

Overall, the research team concluded that the Chemcatcher® passive samplers was successful in detecting a variety of contaminants across the study period, comparable to the analytes detected in the one-time grab samples, albeit with differences in concentration and number of contaminants detected.

Compared with alternative passive samplers, they liked Chemcatcher® “because it is very easy to use, possible to activate without a vacuum pump and, following activation, the receiving disk can be kept frozen at -20°.”

They also liked the sturdiness and weight of the metal Chemcatcher® cage in terms of it being easy to secure and having confidence that it wouldn’t float away. Based on overall effectiveness, they have purchased additional Chemcatchers® to deploy at multiple locations.